6 days in London has flown by, and it has only rained briefing on the last evening in London (Tuesday), on the way to The Shard. I decided to spend the 6 days visiting some well-known places that I’d never been, visiting some old haunts, and taking in the view from The Shard.

I’ve been to London quite a few times, and have never made it to Windsor Castle. Having tracked down Anne of Cleves in Westminster Abbey on my last visit, I decided to find Henry VIII in St George’s Chapel at the Castle.

Foolishly I didn’t buy a ticket in advance, and the queue in the afternoon stretches down the street and around the corner. It takes about 45 minutes this way…much better to buy a ticket on-line. 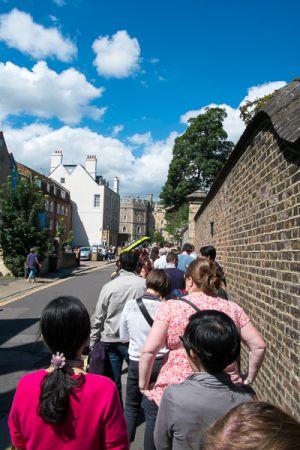 St George’s Chapel is a bit of a disappointment – you are basically corralled around the sides of the nave, so it feels more crowded than it actually is. No photography is allowed inside (and indeed in the rest of the interior of the Castle). Henry VIII’s resting place is marked by a tablet in the floor near the altar, along with the only one of his wives to be buried with him (Jane Seymour), and Charles II. So it’s a bit crowded in that particular vault.

Windsor is still a working castle, so the only ‘open’ areas are the State Apartments and Queen Mary’s Doll’s House. The Doll’s House really is fit for a queen – the size of my bathroom at home, and a scale model of a palace, with bedrooms for the King and Queen, nursery rooms, servant’s quarters, a cellar, and a huge garage for the cars. It also has front and back gardens. 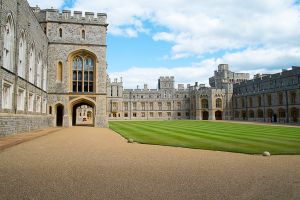 The State Apartments are designed to impress, and feature a lot of gold leaf. I still prefer the painted decorations of Oslo’s Royal Palace though.

The small town of Windsor is quite pretty, with many shops, restaurants and cafés, all catering to the tourist crowd and the local college.

London is of course famous for its theatres. On Saturday evening I buy a ticket to Noel Coward’s Private Lives, playing at the Gielgud Theatre. The only reason it catches my attention is that I recognise both of the lead actors from TV  – Anna Chancellor and Toby Stephens. I end up with an excellent seat in the stalls, and it is a fantastic production and not too long at 2 hours including the interval.

I also buy a ticket to War Horse for Monday night, which is playing at the New London Theatre, a very non-descript theatre in a strange area of London, walking distance from Holborn Underground station. War Horse plays for just under 3 hours, including the interval. It seems a bit on the long side, but again is an excellent production.

It must be nearly 20 years since I last visited Kew Gardens. I remember it was winter, in the mid-1990s. I also don’t remember it being £16 entry. Sunday is a good day to get out of London – it’s a pleasant summer’s day, and I’m glad I remembered to put a hat in my bag.

The Temperate glasshouse is closed for renovation/restoration. The stone plinth at the entrance shows that the Queen re-opened it in 1982, and a little over 30 years later, the ironwork is showing extensive rust and peeling paint. 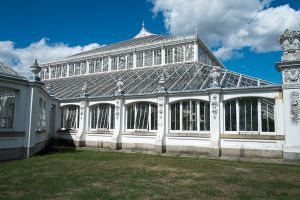 The entry fee also includes access to Kew Palace, which I think is usually closed in the winter, so a wander round the palace and gardens are in order. 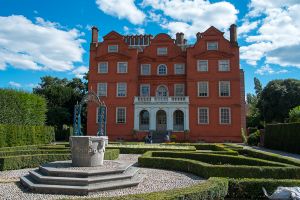 Otherwise Kew Gardens are a good place for a long walk around their well-maintained acres. 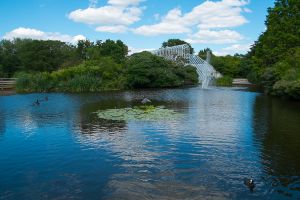 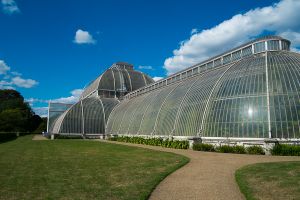 The shocking thing is though how low the Thames is at Kew Gardens – the view across to Syon House is mostly dry river bed, and the Thames looks like you could wade across it.

It’s worth visiting this station without luggage, if only to get to the first floor to look at Paul Day’s amazing sculpture. 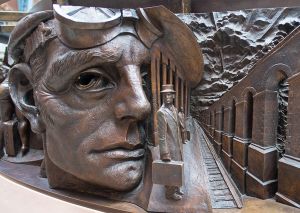 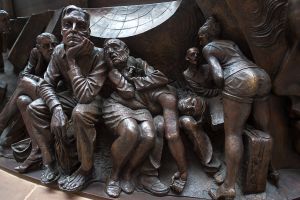 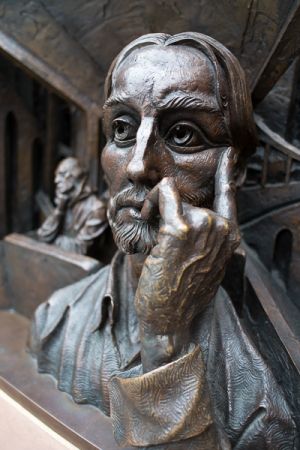 There are plenty of shops, restaurants and cafes on the ground floor, including a Boots pharmacy and beauty hidden at the back of the station, a M&S Simply Food, and a W H Smith, which you don’t necessarily find when you’re lugging luggage around.

I’ve never been to St Paul’s Cathedral, and have learnt from visiting Windsor Castle that buying tickets on-line is the way to go. It’s less busy than Westminster Abbey – much larger, so it feels less crowded. No photography is allowed, but that doesn’t detract from the marvel that is the glass mosaic ceilings above the altar. They are relatively ‘new’, and were only finished in 1904. 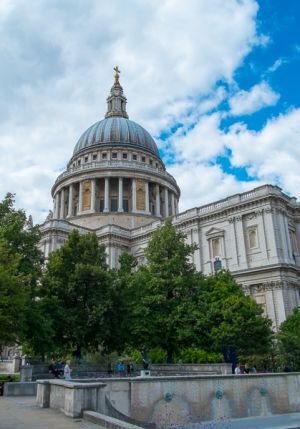 St Paul’s also has an excellent crypt, with Wellington and Nelson a couple of prominent residents. The architect of the Cathedral, Christopher Wren, has a very plain and difficult to find plaque set in the floor, in complete contrast to some of the other memorials. The crypt is also notable for its memorials to the various Arctic and Antarctic campaigns of the early and mid-20th century.

For my final evening in London, I book a ticket for the view from The Shard. The first Shangri-La hotel in the UK is due to open there later in 2013, and is still undergoing the final touches. Tickets are based on timed entry, but there is no limit to how long you can stay. There are two viewing platforms, one enclosed and one exposed to the weather. I spend most of the 2 hour visit on the ‘exposed’ platform. It is well-designed enough to be protected from the wind, and the difference in temperature 72 floors up is only about 5 degrees from that at ground level.

I wish however that I’d brought my DSLR and a polariser, rather than the Fuji X-Pro 1. The biggest problem with both viewing platforms at the Shard is the reflections in the windows, caused by the sloping glass, which means that putting the lens of the camera flat against the glass simply gets you a shot of clear blue sky. It is hard work trying to get a clear shot of London without a reflection of the white and black striped top I’m wearing or the shiny chrome handrail, even when the sun starts to drop.

It’s worth going up to the Shard for the view of London, although ironically the worst view from the Shard is towards the Palace of Westminster and Big Ben due to the convergence of the structural supports of the building. 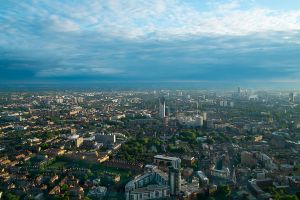 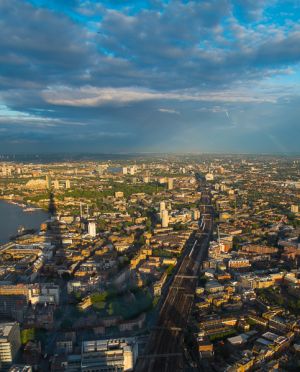 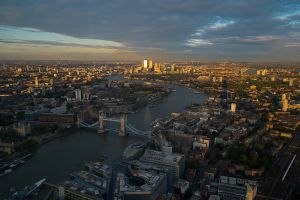 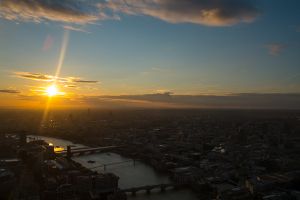 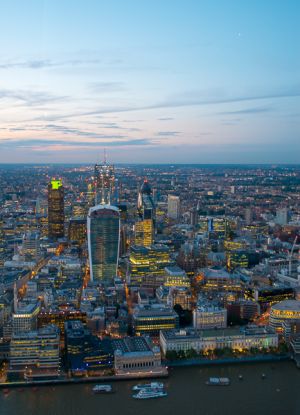 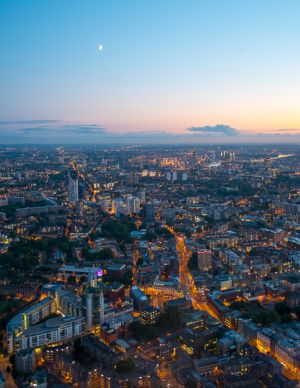 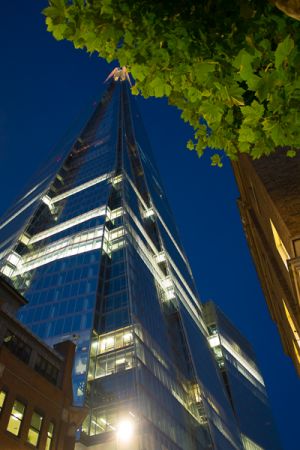